I got a GMail invite from a friend, so I've been testing it out - or rather, abusing it. I've installed GMailFS for Linux, which allows you to mount your GMail 1 Gb message space as part of your Linux file system (there is a Windows port, which allows you to have gmail a 'drive' in Windows).

Here are my steps to get the working - the successful ones. It includes installing a kernel module, so it's a bit more complex than the usual Debian install procedure.

Some of these came from rene, cheers!

For some reason it wouldn't let me mount in my user area. Odd.

But anyway, it works - obligatory screenshot, that doesn't show much: 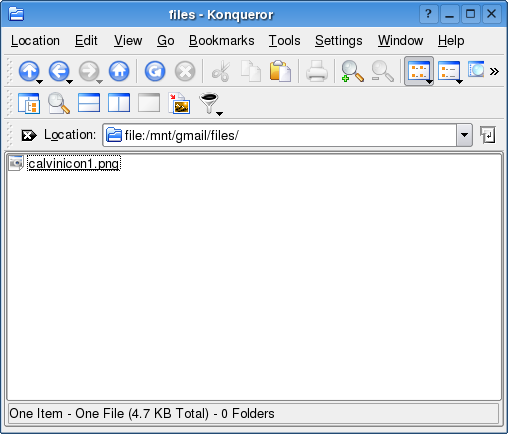 It's very slow and inefficient of course - the author comments that it has to download the entire file just to do a list, which obviously he's trying to fix. But I can indeed manipulate files just like they were part of my normal filesystem, very cool! It means, for example, I could write a script to run overnight that could backup important files to gmail, or sync from gmail, or whatever I want - anything that can be done with files.

As for the actual mail functions, I haven't tried them out much, I'm not sure if I will as they don't work perfectly with Konqueror. Also, I can imagine using up 1 Gb reasonably quickly - I curently have nearly 600Mb on my hard drive from the past 4 years, all of which I want to keep, and can search pretty quickly (using mairix). I think also that my current e-mail client has far too many features and customisations for me to be able to switch fully to a web client.