So, I'm back in Amman, time for some updates on what I've been doing this week. There's loads I could tell, so I'll try to limit myself...

On Monday we set off to the south of Jordan, and stopped on the way down at Karak Castle. That deserves a blog post of its own, but I'm going to quickly rush on to Wadi Rum — a desert area of Jordan. We were outside of the main tourist season, and on arrival we were met by a Bedouin man who arranged to put us up with his family that night and organised camel rides and a jeep ride the next day (all for a price, of course, but the hospitality is a really attractive part of the culture here).

This is the tent we slept in: 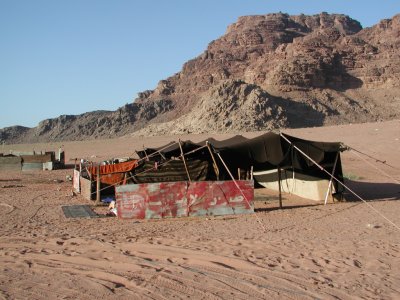 They have been made like this for thousands of years (minus the corrugated iron, of course), and the lifestyle of these Bedouins, on the edge of the desert, has likewise remained very constant over this time (again, minus the addition of pickup trucks which have partly replaced camels in the past fifty years).

After a traditional evening meal, and Arabic tea (which is sweet and very refreshing), we slept basically under the stars. It was a fantastic night for star gazing — as clear as I've ever experienced, no moon, and far from any light pollution from inhabited areas. I couldn't actually sleep much, but it didn't bother me, as the night sky was just glorious. I saw dozens of shooting stars, and I'm pretty sure I saw I could see a cloudy structure that seemed to be galaxy — normally only the very centre is bright enough to be seen. I've tried to memorise the positions of the surrounding constellations, so I'll look it up on Stellarium as soon as I get the chance.

In the morning, having been awake since half 3, I got up early and climbed this hill before breakfast, which was a lot of fun: 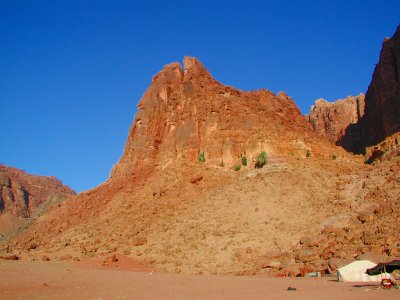 Finding my way down again was even more fun! After breakfast with the Bedouin family, our camels arrived. I was not prepared for just how uncomfortable the ride would be — after a while I became convinced that the saddle was on backwards, and turning round (which was easy enough to do without dismounting) did in fact make it ten times more comfortable, if slightly less conventional. Sitting sideways was probably the best, and almost any position was better than the most obvious one. Still, it was a fun experience. Up close, camels do look like quite alien creatures — their strange, two-toed feet and curious gait make them seem like genetically engineered alien products. We stopped at the foot of a mountain to explore a cleft — or 'siq' as I believe it is called: 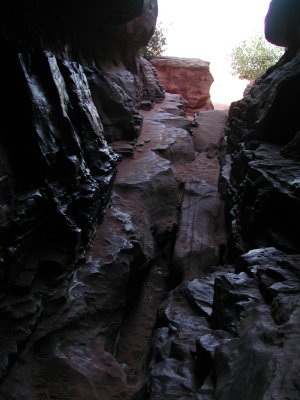 and also enjoyed a stop for tea with another hospitable local Bedouin. Shortly after, for more rapid progress and exploration, we continued by jeep: 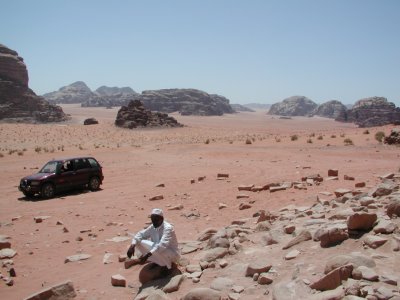 We were taken round various interesting parts, including various natural rock bridges like this one: 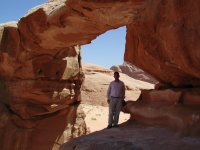 (Peter and myself were both on top of this one shortly afterwards, but you never have the camera in the right place at the right time). Of course, we had to try a bit of sand dune leaping too: 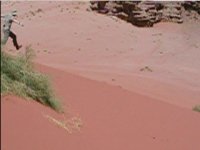 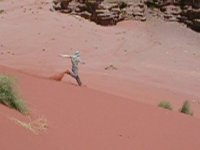 The sand is mainly a pink-orange here, but it does in fact vary quite a lot in colour. And the desert just goes on ... 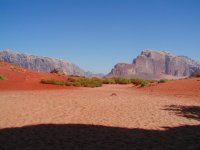 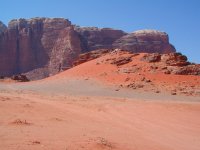 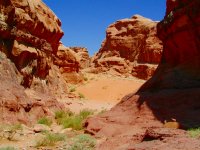 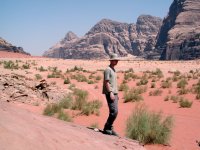